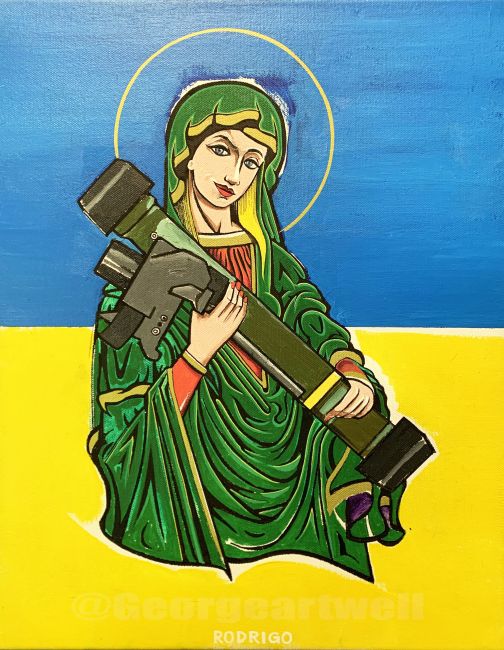 This piece was inspired by the "Saint Javelin" iconic digital art viral image that appeared a few days into the war in Ukraine due to the invasion of the Russian armed forcers of Vladimir Putin.

When I first saw the image of "Saint Javelin" I loved the use of the orthodox icon with the addition of the Javelin rocket launcher produced by the United States of America. Since the tension is so high between the democratic and free world and the authoritarian Russian regime. No direct help could be given to the heroic Ukrainians for their military and civil to use to defend themselves from the invasion. Since Russia's' macabre symbols are columns of tanks with the letter "Z" roughly painted on their sides, "saint Javelin" became the symbol of resistance and of Russian stalling in Ukraine military. This painted/ symbol came  with many levels of meaning. It was also meant to communicate informally that help is on the way. To this date the world have supplied more than 17000 rocket launchers like the Javelin to Ukrainians, thus why they call her/it "protector of Ukraine"

As I said, As soon as I saw the original digital version I liked it but I felt I had and wanted to do my own. First, because I got a particular style a feel when I do these works on canvas with painting, Secondly because I like icons and these types of interrelating concepts of tradition and modernity, I've already made pieces inspired by orthodox iconography and felt I could do it more justice to the concept (and my inspiration) by making my own version. I could not stand by and not use my art and reach to support Ukraine's freedom and just cause. I added to this article a tweet and a link towards a version available in #NFT format.