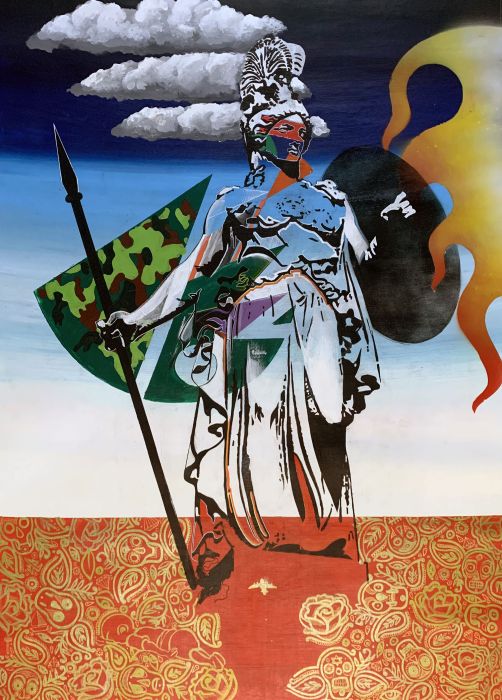 "Athena 2 - La Victoire de l'Occident" is a commissioned work based upon my original work "Athena". A few months ago, I high-school friend (we’ll call him “AC”), reached out and we talked about our separate journeys, how the world had changed since we were at school some 25 years ago and my artistic interpretation of events. AC had scrolled through my works on my website and was enamored with "Athena", but given the original work was already in a private collection, I offered to create a new version.

And so Athena 2 was effectively commissioned, not as a copy but a new piece based on the composition of the first with some key differences. The first thing I want to say about this work is to explain its French title "La victoire de l'Occident” which translates simply to "the victory of Occident". Athena is the Greek Goddess of Knowledge and War. Cultured in the cradle of western civilization, she's the main and obvious symbol of occidental culture. And as such, the title is clearly ironic; numerous compositional aspects both subtly and explicitly allude to the defeat of occident.

Athena stands on a sanguine red mantle, gilded with skulls and iconography that contrast with the dark blue and black and white, allusions to grand notions of patriotism that comprise many western flags and banners. If you look closer, hidden in plain sight is the figure of Aylan Kurdi (the three year old Kurdish refugee who was found lifeless and washed up on a Turkish beach). Here, Aylan is painted exactly as portrayed in the satirical journal, Charlie Hebdo. 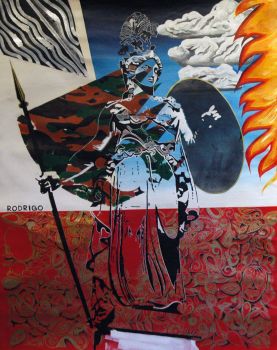 "Athena" is the first and original piece. "Athena 2" is the second version that I was comissioned since the first was allready private and not available.

The second important symbol is right under Athena, and that is the reproduction of the image of the fall of Kabul, Afghanistan. Reference is made to the last military plane leaving the airport in the mayhem of the retreat of US armed forced and the tragedy of desperate civilians holding onto to the plane’s undercarriage, only to fall to their demise. There is little that is subtle here for those who intentionally look and understand - the times we are living in today are hardly "the victory of Occident". That said, I don't mean this piece as a sad or depressing art work. I mean it as a critical piece to challenge the viewer think about and struggle with the journey of civilization. Everything has two sides to it, the good and the bad, the spear and the shield, and sometimes winning is losing and vice versa.